A week ago Saturday, on January 20 at UFC 220 in Boston’s TD Garden, UFC Heavyweight Champion Stipe Miocic elevated himself to a spot on the pyramid of heavyweight success that no man has reached before.

Last night, the UFC made an announcement, sending shockwaves through the MMA world, that Miocic will face-off in a superfight against light heavyweight champ Daniel Cormier on July 7. Cormier is also fresh off of UFC 220 title defense himself, winning decidedly by way of TKO. The two champions will be the main event of a stacked card UFC 226 at T-Mobile Arena in Las Vegas, Nev.

Miocic is the most successful UFC heavyweight champion of all time, yet oddly enough, he is still far from a household name. Today, we change that. Here is a list of reasons why you should know who Stipe is.

#1 Stipe Miocic is the baddest man on the planet.

UFC Heavyweight Champion Stipe Miocic has entered into uncharted territory and done something that no heavyweight in the two-decade-plus history of the UFC has been able to do. On January 20, 2018, at UFC 220: Miocic vs. Ngannou, Miocic became the first man to successfully defend the heavyweight title three times in a row. Miocic outlasted the heavy handed and heavily hyped Francis Ngannou for five rounds. He passed the likes of Cain Velasquez, Randy Couture, and Brock Lesnar, all sitting at two defenses during their respective title reigns.

“I’m not the scariest (man on the planet), but I’m the baddest.” –Stipe Miocic after defeating Francis Ngannou by unanimous decision at UFC 220: Miocic vs. Ngannou.

#2 His Championship Resume Is Incredible.

Miocic first won the title back in 2016 at UFC 198 by knocking out Brazilian superstar Fabricio Werdum in Brazil. For those of you who do not follow the sport, that is a VERY big deal to be able to go into Brazil and take a belt from one of theirs. That night will be forever remembered by Stipe hopping the cage screaming, “I’m the world champ! I’m the world champ!”

His first title defense came against Alistair Overeem, the most decorated heavyweight striker of this generation, at UFC 203 in his hometown Cleveland, Ohio. Miocic faced adversity early by getting dropped by a punch from the former K1 Grand Prix champion, but he was able to recover and ultimately scored the TKO by way of punches.

Miocic avenged one of his only two losses in his career in his second title defense. At UFC 211, Miocic announced his presence with authority by knocking out Junior Dos Santos just past two minutes in the opening round. Stipe was not about to let history repeat itself as he was swinging for the fences right away and connected to knock “Cigano” out.

Three of the champ’s last four fights have also earned him Performance of the Night bonuses.

#3 When he’s not (nearly) taking lives, he’s saving them.

Outside of dominating the octagon, Miocic is also a first responder firefighter paramedic in Ohio.

#4 Miocic is a blue-collar type of guy 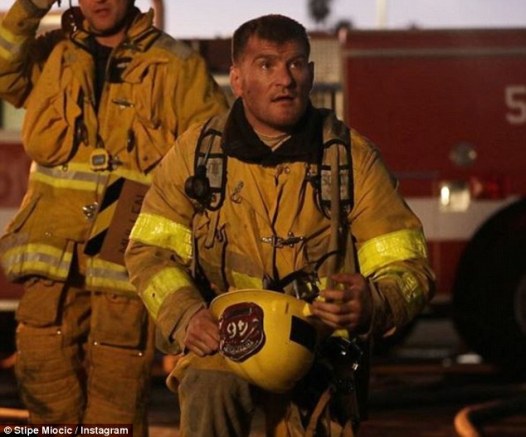 Miocic is from the Cleveland area and is a perfect personification what a “Cleveland guy” is. He has that hard hat and lunch pail mentality that’s driven him to succeed.

A fan of the simple life rather than celebrity superstardom, Miocic often references attempting household chores, he loves his wife whom he enjoys pranking, and goofing off hanging out with his boys as what is important to him.

Miocic has famously discussed things such as fixing his cabinets and working on his kitchen along with being exuberant over his new snow blower.

On the UFC embedded series, it is hard not to become a fan due to his constant shenanigans and basically being a 35-year-old big kid. He constantly pranks his wife, and on occasion, she obliges and returns the favor.

Miocic has famously discussed things such as fixing his cabinets and working on his kitchen along with being exuberant over his new snow blower. On the UFC embedded series, it is hard not to become a fan due to his constant shenanigans and basically being a 35-year-old big kid. He constantly pranks his wife, and on occasion, she obliges and returns the favor.

#5 He was a collegiate standout in baseball

Whether swinging right hands or swinging a bat right-handed, one thing is for sure, Stipe Miocic drops bombs.

Along with wrestling at the Division 1 level, Miocic also received attention from Major League Baseball scouts while playing at Travecca Nazarene University and Cleveland State University. He was a part of a TranSouth Atlantic Conference championship team while at TNU.

#6 He is getting ready to fight the biggest battle of his life: fatherhood.

In typical Stipe fashion, his in octagon post-fight interview at UFC 220 was nothing short of entertaining. Miocic raised his arms and belted into the mic, “I’m having a baby!” 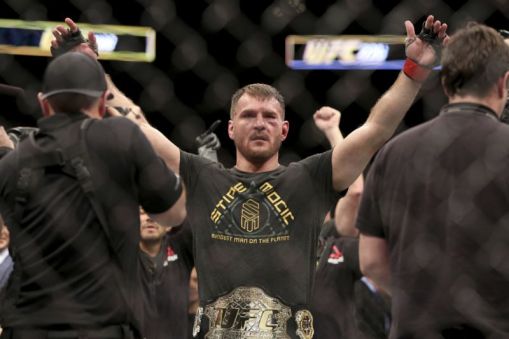 -Jordan Kurtz AKA Kurtzy F is a founding member of Comments From The Peanut Gallery.